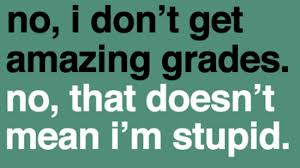 When I was in 8th grade, I found myself in all honors classes.  These classes were filled with all the students who got "A"s in their previous academic life.  The way I saw it at 14, these classes had all the boring people in them AND you had to work harder to get the same grade. I didn't want to be like the people in those classes and was afraid their boresomeness would rub off.

Let's talk about grades.  Grades are demeaning.  Because of the curve on which they are built, they separate us into the smart, the average, and the dummies.  Just because a person is on a different path in their development as a human being does not mean it's OK to label them in comparison to their peers.

The first class that year that I asked to be put in the "normal" class was math.  It angered my math teacher terribly because she knew I could handle the advanced math class material and that this was not the reason(s) I wanted out.  She took me to the office and made sure I was put in her "average" class.

The next semester I had a 99 test average, the highest in the class.  The math teacher took a point off my grade for every missing homework assignment (I had not done any of the 30) and I received a "C". (It should have been a D, guess my math teacher had trouble with math). Lesson not learned! Just made me hate the grading system for the rest of my pre-college years.

It wasn't until I found myself in NYU classes at age 20 that I would revise my thinking on this subject.  The professors at New York University so were so good that classes were like going to a play in which we the students and the professor were all actors in the play. I never missed a class after that and my grades skyrocketed.  And being the accountant that I was to become, I computed that each class cost $50 in tuition at the time and I wanted my dad to get his money's worth, or at least he did.

Posted by Howes The Money at 6:36 AM No comments: 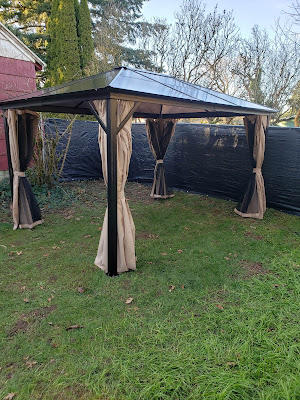 My son and I built this Gazebo yesterday and today. Or should I say I collected garbage and tightened screws and the son did the rest. Have some rattan furniture that also needs to be built.  And 50 feet of string lights. And installing electricity from the garage. And astroturf and outdoor heater. Whew, I need a rest from making a place of rest.

Gazebo cost around $800 less the 5% I get off my card for charging it online.  I spent too much time finding one with a hardtop that will not blow away and leak like a sieve. And didn't cost $2500.And now my back hurts.
Posted by Howes The Money at 4:58 PM 1 comment:

Welcome to my Nightmare

Always loved Floyd and this is my favorite tune. Our son Chris was 16 when we took him to his first concert in 1994.  It was Pink Floyd at Tampa Stadium.  He has never been the same since.  In a good way.
Posted by Howes The Money at 5:48 AM No comments:

In my old age, I have suddenly found the urge to write.  My life seems somehow more important to me.  Life's trials and tribulations are more intense and meaningful.  Memories are more vivid.  As thoughts and memories come to me I will post here.  Expect healthy doses of cynicism sprinkled with philosophy and politics. Nothing is off limits. Truth and accuracy is the rule.

Posted by Howes The Money at 5:17 AM No comments:

Howes The Money
Vancouver, Washington, United States
Hi, I am not an author nor a wise man but I try to be both.

Student with attitude  When I was in 8th grade, I found myself in all honors classes.  These classes were filled with all the students who g...